A Combination Bike Lock: Is it really less secure?

The short answer is: yes! Locks that you open with a code are generally less secure than locks that require a key. But why is this and does it mean we should avoid combination bike locks altogether?

Well, not necessarily. Let’s look at this in more detail…

So, just to be clear: combination bike locks are the ones with a several dials of numbers that you turn around to make a combined code that opens the mechanism. There are usually 3, 4 or 5 rings so the code is 3, 4 or 5 numbers long.

These locks are popular because you don’t need a key: as long as you can remember the code you can always unlock your bike. And you can also give the code to family or friends so they can share the use of the lock and therefore your bike too! 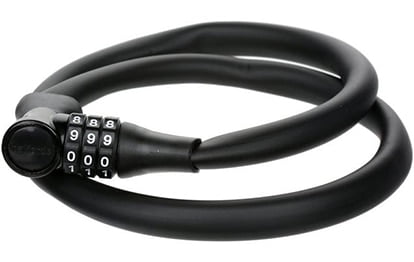 3 dial locks are very quick and easy to crack

The first problem with these locks is the limited number of combinations. With 3 dials there are just 720 unique codes. So with averagely nimble fingers, which could test one number per second, that’s a maximum of just 12 minutes to test every combination. And of course: the correct code isn’t likely to be the last one a thief tries! 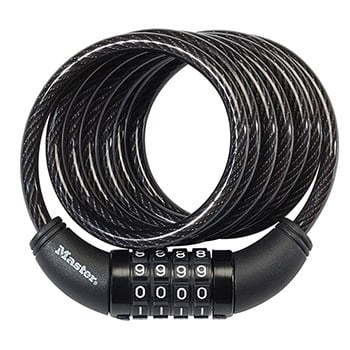 However with 4 dials there are 10,000 possible combinations. So the same nimble fingers would take almost 3 hours to test every combination. And in reality, testing one a second for nearly three hours while hunched over a bicycle in the street is just not practical. It would actually take much longer, even if the thief had the patience and nerve to persist.

So while it’s true that combination locks can be opened without any tools at all, by someone without any skill at all (beyond counting), if you’ve got a 4 (or more) dial lock then it’s very unlikely that anyone’s going to defeat your lock in this way.

Unfortunately however, the finite number of codes isn’t the only weakness of combination locks…

Or pick them without any tools!

Cheap combination locks are very easy to decode. The way to do this (and I’m not revealing anything new here), is to create tension by trying to pull the the lock apart (in the same way as you’d open it) and then slowly rotating the dials in turn until they seem to click into place…

More expensive combination locks try to thwart this method with “false gates” that give the impression that you’ve found the correct numbers when in fact you haven’t. However they can often still be decoded with a bit of skill…

But the thing to remember is that virtually no bike thieves have the patience and skill required to pick the more challenging combination locks. And in the street they won’t be able to position the lock in a way that makes even attempting to decode the lock practical.

In fact they are most likely to tackle a decent combination lock in the same way they would attack a decent keyed lock: with brute force.

I’ve written many times about how you should never use a cheap cable lock to secure your bicycle. They can be cut in seconds by a small, basic tool that every bike thief carries.

So, yes it’s true: combination locks are less secure than keyed locks. But if you get a decent one with 4 or 5 dials and features that resist the most basic decoding techniques, then in the street, in most instances they are going to offer the same levels of protection as a decent keyed lock.

With that in mind I have compiled a list of some of the better combination locks below. They are all either Sold Secure Silver or equivalent, which is the minimum security level I recommend in a bike lock.

There aren’t any Sold Secure Gold combination locks, presumably because it would be very difficult to make a coded lock that is truly high security.