With the introduction of Sold Secure’s Diamond rating in 2020, the top tier of bicycle lock security got a lot more exclusive. Diamond rated bike locks represent the most secure bike locks you can buy.

And as we know, with greater security comes greater weight and also, to some extent, less practicality. So it’s no surprise that Diamond rated locks are some of the heaviest and unwieldy locks around.

However, Litelok are about to step into the fray with a new offering, the Litelok Core, which promises Diamond rated security, at a weight that’s not excessive and with various lengths that will give you loads of locking and carrying options.

So I got hold of a pre-production model to see how it’s likely to work out in the street! 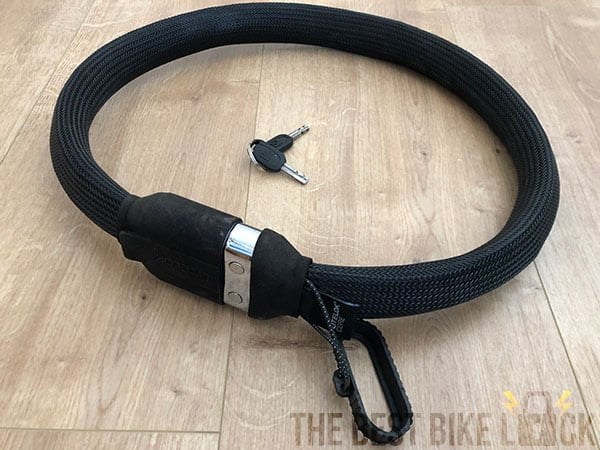 Unfortunately, the 100W was slightly too big for me to wear around my waist, so I couldn't test that, but the wearable version will come in three different sizes, which means you should be able to find one that does fit!

Once the Litelok Core has been released to the market, I’ll test it fully and write a comprehensive review. But here are my first impressions after using the pre-production model for a few days...

I don’t have to take a crowbar or a giant set of cable cutters to the Core to know this. Sold Secure have already done it and they’ve awarded the Core a Diamond rating. This puts it in rarefied company.

Currently there are very few bike locks that make the Diamond grade. And they’re the most secure locks you can get.

2. It gives you loads of locking opportunities

I couldn't find a street sign that I couldn't lock my bike to!

I was able to get the Litelok around every lamppost, traffic light, street sign and telegraph pole in my area.

3. It’s easier to use than previous Liteloks

With the Litelok Original, the tall, “belt like” band could be difficult to get through the spokes of your wheels. The band of the Litelok Core is more “rope like” in shape. So it’s shorter, making it much easier to pass between your spokes. 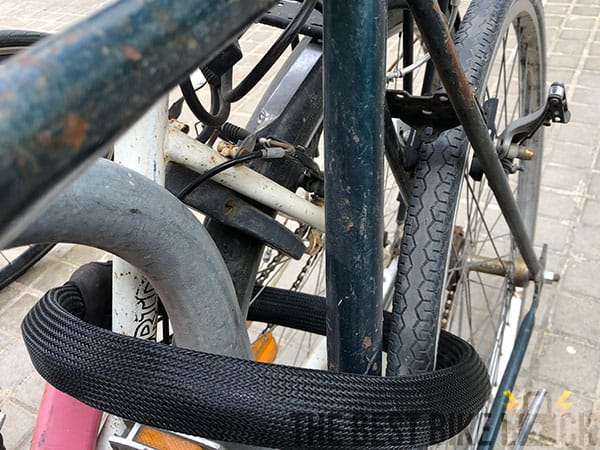 Plus the way that it’s pre-shaped into a hoop (unlike the Original), and can be locked without the keys (by simply clicking the ends together), means that it’s much quicker and easier to get it secured around your bike.

When you pick up a 100 cm Litelok Core, “wow, that’s a really lightweight lock” is not the first thing that comes to mind. That’s because at 2 kg (4 lb), it weighs slightly more than 5 cans of Coke.

But what you need to remember is that a Diamond rated chain lock that offers a similar locking circumference will be almost twice as heavy as this, making it completely unpractical for mobile security.

The shortest, lightest Litelok Core will be the 75 cm (29”) Flex-O. It’s not wearable at this length, but it weighs just 1.6 kg (3.5 lb), making it one of the lightest Diamond rated locks currently available.

In fact, only the Abus Granit X Plus 540 and the mini Pragmasis DIB are (just slightly) lighter, and neither of those will allow you to lock your bike in the same places that even the smallest Litelok Core will open up.

I’ve tested a lot of bike locks and the Litelok Core has really impressed me. Diamond rated security at this size and weight is unheard of, and the Core will bring much needed practicality to the top tier of bike locks. 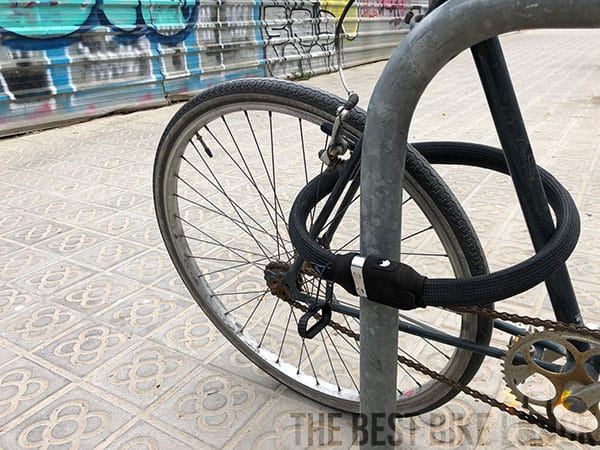 Diamond level security at this size and weight is unheard of

Once it’s released to the market, I’ll test the final version for a longer period of time to get a better idea of what it’s like to use and carry around on a daily basis.

But the pre-production model certainly seems like it will be a great choice for those that need to very highest levels of security, without sacrificing the number of places they’ll be able to secure their bikes.