When I first started researching and writing about bicycle security, over 6 years ago (in 2015), angle grinders weren’t such a big deal. Yes, some thieves used them. But they weren’t widely used. And they struggled to defeat the very strongest bike locks.

This was because limited power and battery life meant it would take a while to cut through a thick u-lock, with a thief often needing to swap battery packs at least once as the first one ran out of juice.

However, technology moves quickly, often to the benefit of the resourcefully criminally minded first. Batteries have improved at an exponential rate which means that thieves now easily have enough power to get through even the thickest u-locks, very quickly indeed.

For example, even the famous Kryptonite Fahgettaboudit, undoubtedly the world’s most secure portable bicycle lock up until now, featuring an unrivalled 18mm hardened steel shackle, can be defeated in 1 minute with a portable angle grinder.

To defeat the most secure bicycle lock on the planet! A lock that weighs the same as 5.5 cans of Coke and has internal dimensions so small that it severely restricts where and how you’re able to secure your bike.

Many thieves are very comfortable with a 1 minute time frame. Especially when an angle grinder can serve as a very dangerous weapon if they’re confronted by brave members of the public...

So for the last few years, we’ve been in a situation where increasing numbers of (essentially armed), thieves are using compact and powerful portable angle grinders to steal whichever bike they choose, irrespective of how its been secured.

And usually in a matter of seconds.

Now, don’t get me wrong, this idea that all bike thieves are using angle grinders now is nonsense. It’s still a minority and they’re largely operating in big cities. Why would most thieves need angle grinders when huge numbers of cyclists are still “securing” their bikes with cable locks that can be snipped through with a tiny pair of cable cutters?

But the problem is that the thieves using angle grinders are prolific and relentless. And up until now (in a world where the police seem to have better things to do than address bicycle crime), they’ve essentially been unstoppable.

But as is usually the case the market responds to need. And as angle grinder theft became more of an issue, the innovative rushed to find solutions.

First came the SkunkLock, a bicycle lock that doesn’t aim to prevent an angle grinder cutting through its shackle, but instead to severely punish the thief wielding the angle grinder by releasing a cloud of noxious, vomit inducing gas into their face, preventing them from actually stealing the bike. 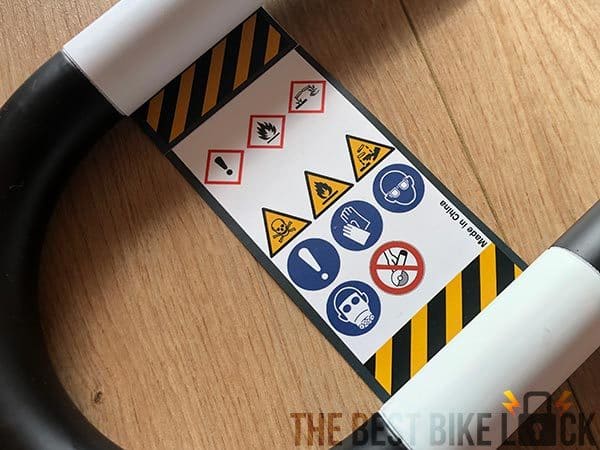 While the SkunkLock works well and has successfully protected countless bikes, it’s very bulky making it challenging to carry around while you’re riding and if the shackle is cut into (and releases the gas), the lock can’t be used again.

Next came the Altor SAF, a bicycle lock which I originally thought was a Photoshopped spoof, when I saw the photos! 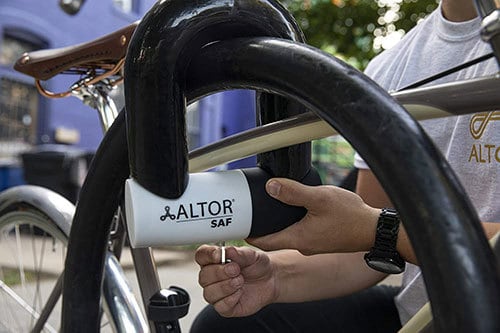 In fact, the SAF is a pretty standard steel u-lock with a 14 mm shackle, wrapped in a complex aluminium shell. The idea is that the aluminium shell keeps the angle grinder blade away from the steel of the u-lock.

Of course with enough time, the angle grinder can get through both the shell and the steel shackle, but this can take over an hour and several battery changes. So in this way the SAF is certainly angle grinder proof.

The problem is that it’s enormous. It weighs the same amount as 3 Kryptonite Fahgettaboudits (and 16 cans of Coke). What’s more it’s so bulky it’s entirely non portable. And the internal measurements are about the same as a mini u-lock.

So you’re limited to stationary security (at home or work), as long as you’ve got an immovable object to secure your bike to that the SAF will actually fit around.

While the SkunkLock and Altor SAF are undoubtedly fantastic innovations and will certainly protect against angle grinder theft, due to their bulk, they’re unlikely to become mainstream portable bike locks.

What we really need is a regular looking bike lock that an angle grinder is unable to cut. Enter the Hiplok D1000. 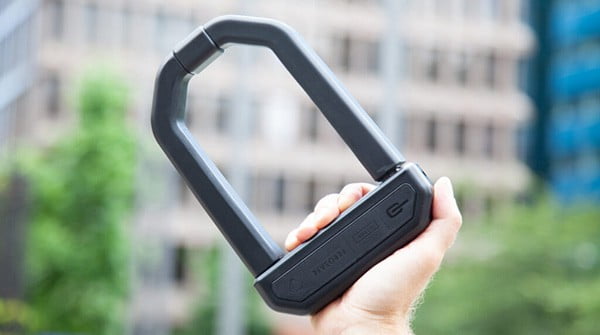 In 2020 I tweeted about a new material called Proteus which “uses ceramic spheres in a cellular aluminium structure to foil angle grinders, drills and the like by creating destructive vibrations that blunt any cutting tools used against it”.

However I’ve heard stuff like this before, and I presumed it would be several years (if ever), before any new fangled material could be used in commercially viable bike locks. Usually the material is too expensive, or the manufacturing process is too expensive. Or there are other technical drawbacks.

How wrong I was.

Because Hiplok (a company that's made it’s name with bicycle locks that are easier to carry around), are about to release the world’s first truly portable, anti angle grinder bike lock, and the secret sauce is a new material called “Ferosafe”. 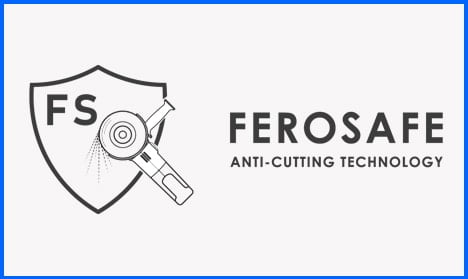 Ferosafe: the magical material that makes it possible

So it’s not made from the aforementioned Proteus. Instead, this Ferosafe stuff is a graphene composite material specifically designed to resist angle grinders and drills, and it’s made by a British materials manufacturer called Tenmat who have partnered up with Hiplok.

And it seems that Hiplok have added layer of Ferosafe around a regular u-lock to protect it from angle grinder attacks.

Several online tests show impressive results. Cycling Weekly used a mains powered angle grinder against the lock while it was held in a vice and it took them over 20 minutes and they destroyed 5 cutting discs before they got through the lock...

The italics are important here. Because real thieves don’t use mains powered angle grinders and they don’t have the luxury of vices in the street. Using a portable angle grinder and having to hold the lock steady would inevitably take much longer.

John at Bennets (who always provides level headed opinions on motorbike security), attacked it on a motorbike wheel. And while he doesn’t disclose how long it took to cut, he goes through 2.5 discs. And he’s using a mains powered angle grinder too!

So it seems like it could take anywhere between 10 and 25 minutes to cut the Hiplok D1000 with an angle grinder. In the street, where a thief might need to change a couple of battery packs and several blades, this is a really big deal.

And it manages this while remaining relatively lightweight and svelte. So the internal dimensions of the Hiplok D1000 are slightly larger than the Kryptonite Fahgettaboudit Mini u-lock, giving you a few more locking options. But it also weighs slightly less (well, 5% less).

To be fair, there’s not much difference. Which makes the Hiplok D1000 a very heavy portable bike lock. It weighs around the same as 5 cans of coke. And like the Fahgettaboudit, there’s no frame mount.

The lack of a frame mount is almost certainly due to the universal difficulty in supporting that kind of weight effectively against a bike frame. However, unlike many other heavy locks, Hiplok do at least provide a solution: a carry pouch.

Which is just as well really, since Hiplok's name was made on the back of innovative ways to carry your lock!

How well all this works remains to be seen and I’ll wait until I test a publicly available version of the lock to review the lock’s portability as well as it’s usability. It’s interesting that all the promotional videos show the lock being used around the top frame of the bike for instance. And it's inevitably going to be very expensive ($345 or £250).

Of course the most important thing at this point is the angle grinder resistance. And what’s really reassuring for me is that the Hiplok D1000 has already been tested by Sold Secure and awarded a Diamond Motorcycle rating.

So not only is it angle grinder resistant, it’s also extremely resistant to every other kind of attack too.

What does all this mean? Well, it looks like the Hiplok DC1000 will take that crown long held by the Kryptonite Fahgettaboudit to become the undisputed, most secure portable bike lock in the world.

And hopefully we’ve finally got a long term and practical solution to the angle grinder menace that is blighting our cities!