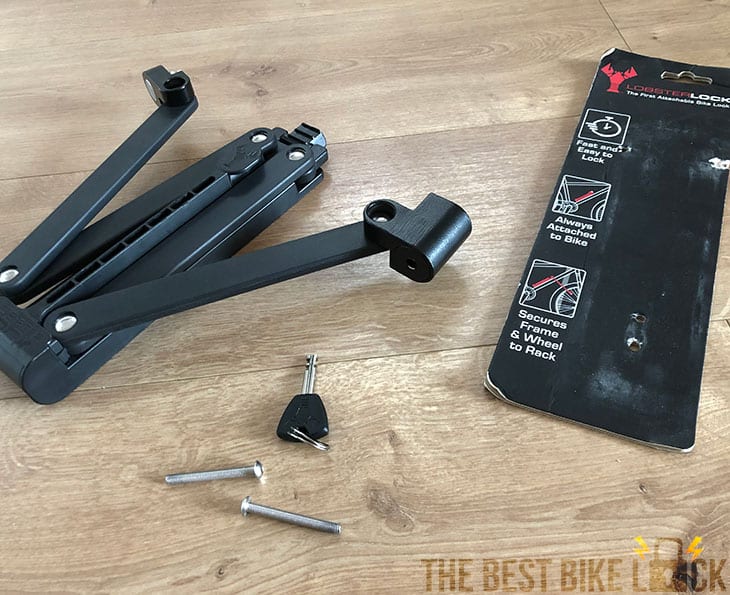 The Lobster Lock is an innovative new bike lock that owes it’s name to the way that it’s two arms envelop your bike (and whatever your bike's secured to), much like the claws of a large, hungry crustacean!

I suppose the Lobster Lock is a bit like a hybrid between the frame locks that are so popular in mainland Europe and the folding locks, popularised by Abus. 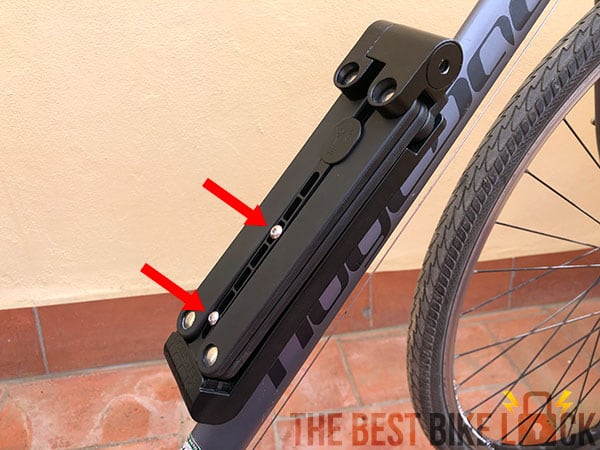 Like a frame lock, the Lobster Lock remains permanently attached to your bike. In the Lobster’s case, it’s simply screwed into the holes in your frame that are intended to be used with a water bottle cradle.

Once attached, the idea is that it’s never removed. Because… 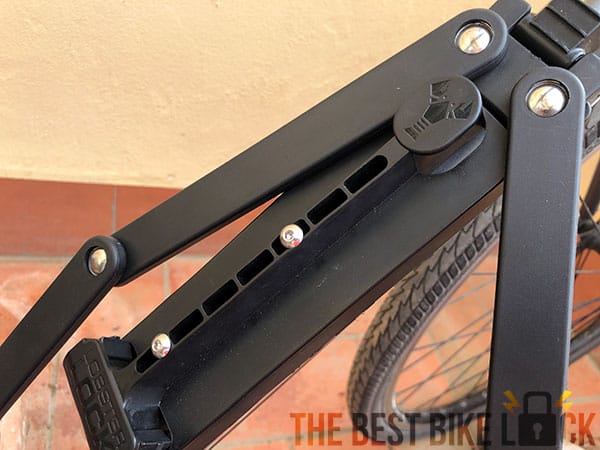 Like a folding lock, it has cantilevered steel arms that fold out from the body, to extend and then fasten around your frame, one wheel, and an immovable object. So you never have to take the lock off the bike.

Locking your bike up incredibly quick and easy. You simply pull up at a bike rack, unlock, pull the arms out, fold them around and through the wheel and refasten. It’s an very elegant process. 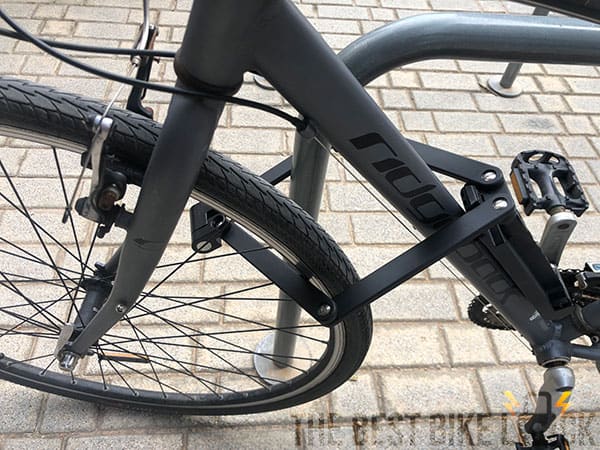 And in my tests, the locking circumference was big enough for me to secure my bike to all the bike racks in my area and some of the street signs and lampposts.

However, there a couple caveats here. Firstly, it won’t be compatible with every bike. So, my bike has 2 bottle cradle spots. One on the down tube and one on the seat tube. Ideally I’d be able to use both for the Lobster Lock.

This isn’t a big issue, as I can’t imagine any bike where it wouldn’t fit on the down tube. 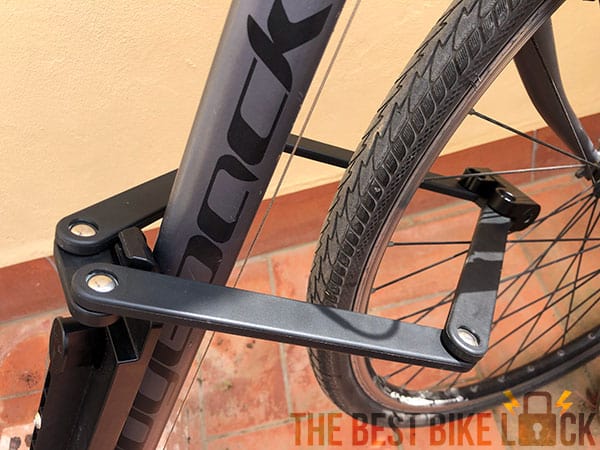 Loads of space on my bike

However, if there’s a big distance between your down tube and your wheel, which there is on some mountain bikes, then the arms may not be long enough to reach around your wheel and the bike rack.

It’s difficult to give you any guidelines that would enable you to work this out yourself. So I’d recommend that if you get in touch with Lobster Lock personally if you have any doubts about whether it’s compatible with your bike.

How Secure is the Lobster Lock?

We can’t be certain how secure the Lobster Lock is at the moment, as it’s yet to be tested by either Sold Secure or ART.

However, since folding locks are rarely high security (there’s only one folding lock with a Sold Secure Gold rating), I would say it would be Silver or Bronze. 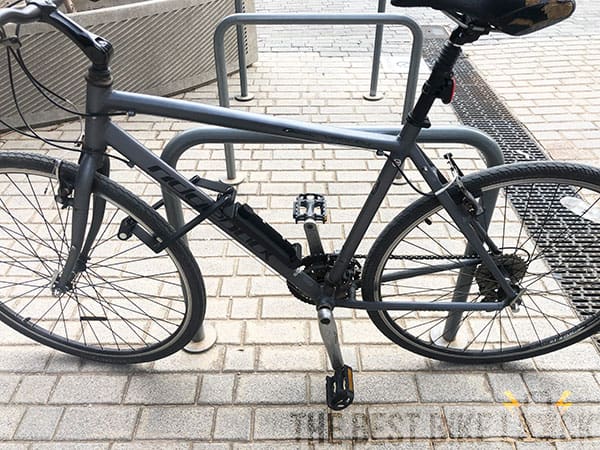 I think it would actually work really well as a secondary lock, since it’s so easy to get around the wheel and also so easy to carry around.

First of all, you may be thinking “why can’t a thief simply unmount the lock from the frame and walk away with the bike?”. I asked myself the same question when I initially saw it was attached to the frame with regular hex bolts.

But when locked, the arms of the Lobster Lock create a closed circle, so even if a thief does this (and you could always use hex key blocking bolts like those from Hexlox or Pitlock to prevent it), as long as it’s secured around an immovable object, they wont be able to take the bike.

Secondly, this is the second iteration of the Lobster Lock. The previous version used a wafer locking mechanism which was pretty easy to rake open with a few strips of metal from a soft drink can. 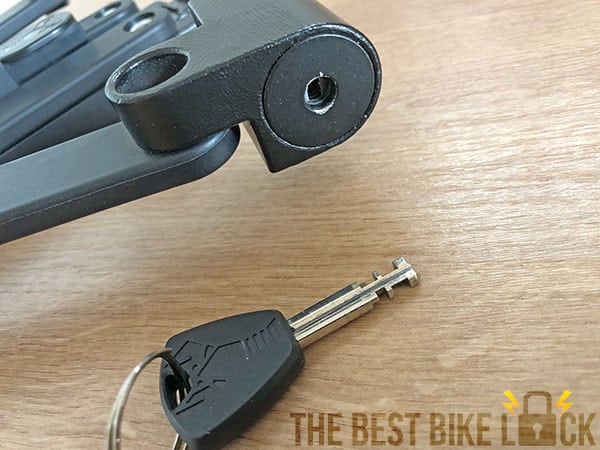 Lobster Lock 2.0 uses a disc detainer mechanism which is significantly harder to open without the keys and requires specialist tools. Here’s a video of the Lock Picking Lawyer who highlighted the initial issue, explaining everything…

One doubt I do have, is how well the plastic frame mount will fare under attack. While the 5 mm hardened steel arms may well resist a vigorous assault, they're attached to the frame mount with a plastic hinge. 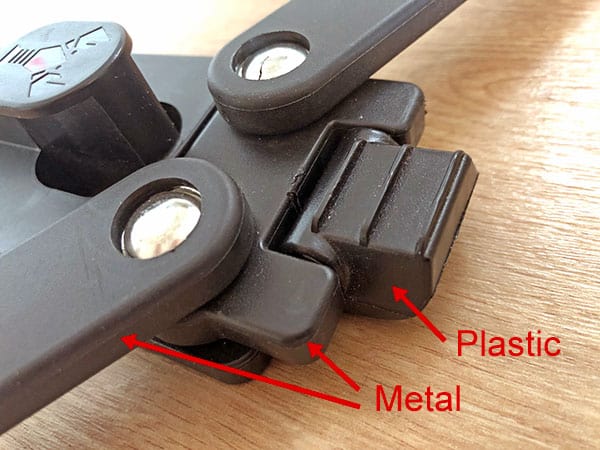 The plastic hinge could be broken in an unsuccessful attack

There’s a good chance that this hinge will break if exposed to any stress and although that wouldn’t result in the theft of your bike, it would make it difficult to use the lock again as it’s intended.

Having said that, I haven’t heard any reports of this actually happening!

A lock that’s permanently attached to your frame but that is also able to secure your bike to an immovable object is a nice evolution from the standard frame locks we’re used to, and great idea from Lobster Lock [Amazon].

Using a folding arm system works well, keeping the lock tidily out of the way while your riding, but providing enough locking circumference in a bike rack to be genuinely useful.

And it’s a super quick and elegant locking experience if your bike is compatible. 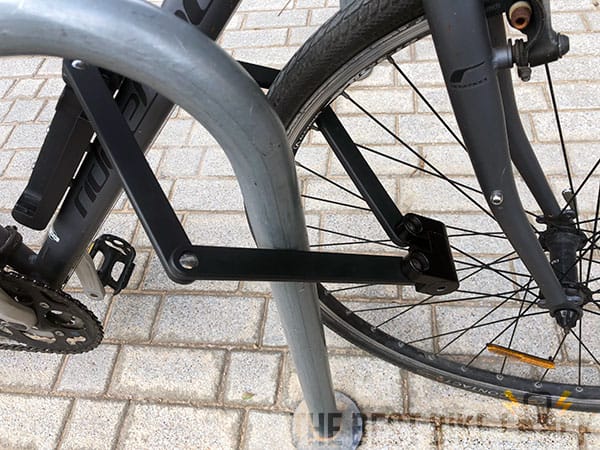 It's a nice idea!

How well the Lobster Lock stands up to attack in the street, both in terms of it’s security and it’s durability remains to be seen, and it’s great that they’re going to get it tested by Sold Secure or ART.

So once it’s been rated, I look forward to testing it for longer and writing a much more detailed and comprehensive review!