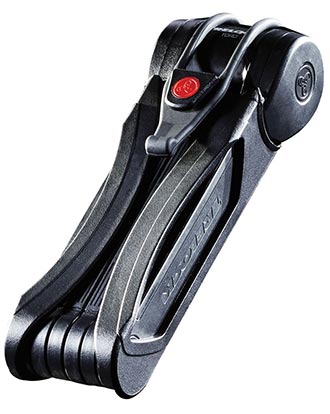 The Trelock FS 500 Toro is one of only two Sold Secure Gold folding bike locks (the other being the Abus 6500 Bordo).

This makes it one of only two folding locks that are suitable for higher risk circumstances. And if you’re looking for a high security folder, this means it’s definitely worth checking out!

To be honest, I’d not heard great things about Trelock bike locks, with the main issues being around build quality and reliability. 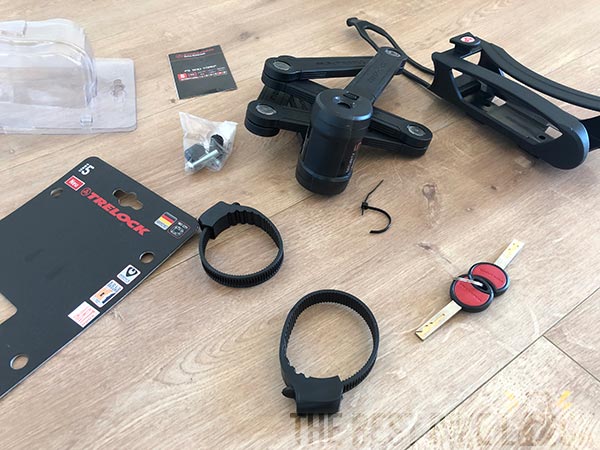 But I’ve been using the Trelock FS 500 for about a month, and while I have some issues with this Gold rated folding bike lock, I was actually pleasantly by surprised by much of what it has to offer.

So how secure is it? How easy is it to carry and use? And what are the alternatives if it’s not the right lock for you? Let’s find out… 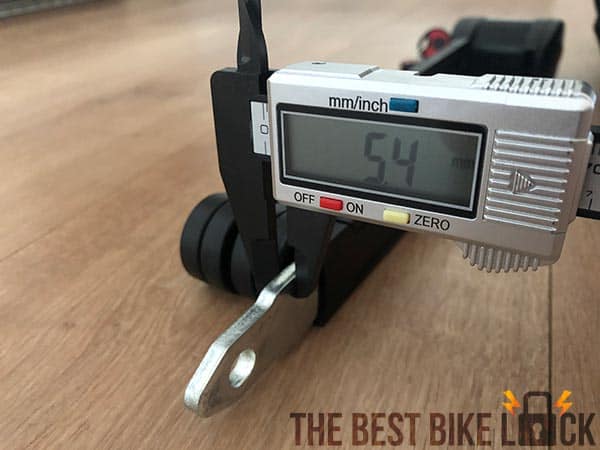 However, while the Abus bars are 25.2 mm wide, the Trelock's bars are narrower, measuring just 21.9 mm across... 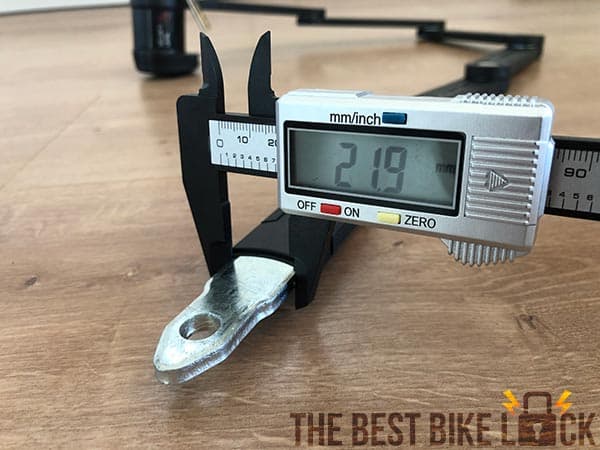 This width difference will at least partially contribute to the weight difference between the two locks. Because despite being 10 cm longer than the Abus 6500, the Trelock is a fair bit lighter, weighing just 3.48 lb (1.58 kg).

Why are the weight and width differences important here? Because they’ll directly influence how secure the locks are...

The two locks are rated both Sold Secure Gold and have 2/5 stars from ART. And this makes them high security locks. But 2 stars from ART puts them both at the lower end of a the Gold rating.

This is as we’d expect: folding locks are generally less secure than comparable u-locks. Thinner bars (compared to u-lock shackles), multiple moving parts and pins that are susceptible to drilling and shearing attacks are the main reasons. 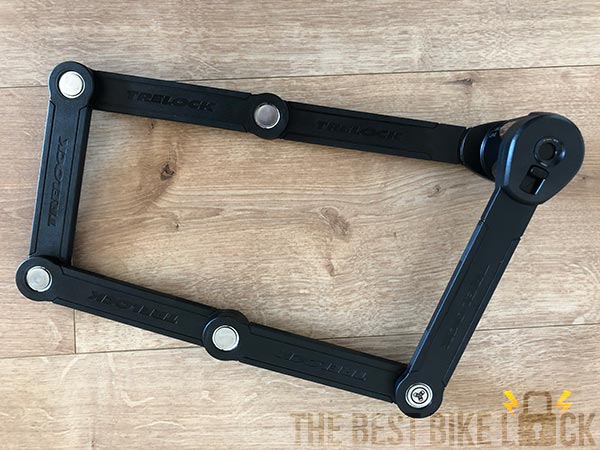 And I would argue that the Trelock is less secure than the Abus folder. The narrower bars and lighter weight are a good indication of that. Because (all other things being equal), more steel always equals more security!

And it's not just me saying that! There have also been independent tests in Germany that found the Trelock the weaker of the two locks.

So as far security is concerned, yes the Trelock is a high security folding lock. But it’s at the lowest end of that rating and it’s certainly not as secure as its main rival the Abus Bordo 6500.

Folding locks are probably the easiest of all the bike locks to carry around on your bike. That’s not because they’re particularly light. They’re not. 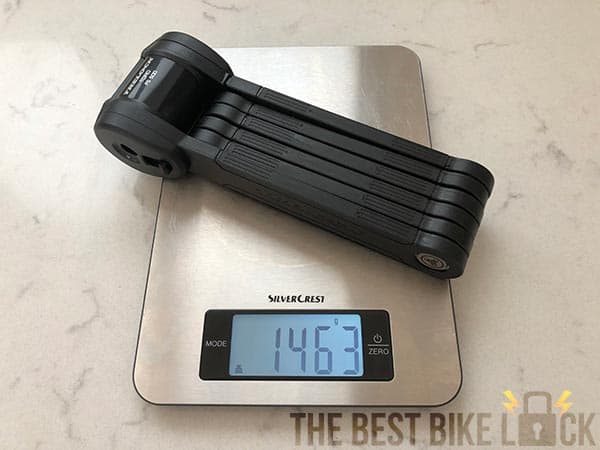 The Trelock is no exception, weighing in at 3.48 lb (1.58 kg). That's nearly 20% heavier than the Kryptonite Kryptolok New-U Standard, which weighs 2.9 lb (1.32 kg) and offers the same levels of protection and a similar locking space. 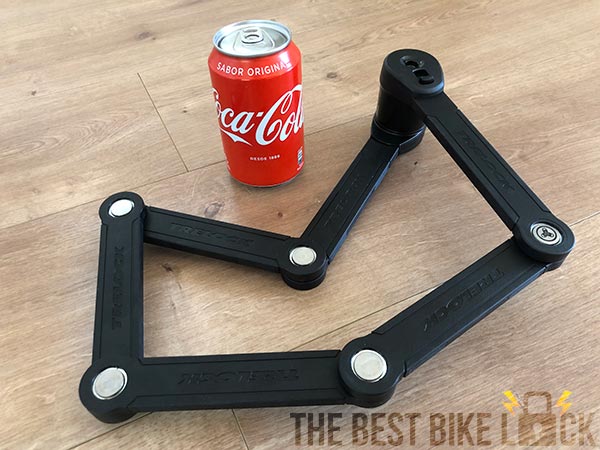 Trelock FS 500 Toro weighs the same as 4 cans of Coke!

And that's the same weight as 4 cans of Coke!

But, no, the reason that folding locks are so much easier to carry, is that they collapse down into a very compact package. If you’re going to throw them in a bag, this means they won’t take up a lot of room. But it also means they work really well with a frame mount… 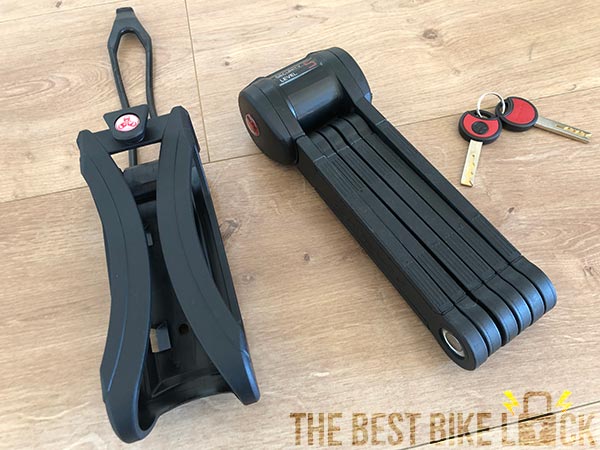 The Trelock comes with a tough plastic frame mount

That small package will sit really close to your frame, which means it’s much less likely to wobble, rattle, work loose (or even fall off) like u-locks can. And this also means that the frame mounts can screw into the holes that are designed for your water bottle cradle... 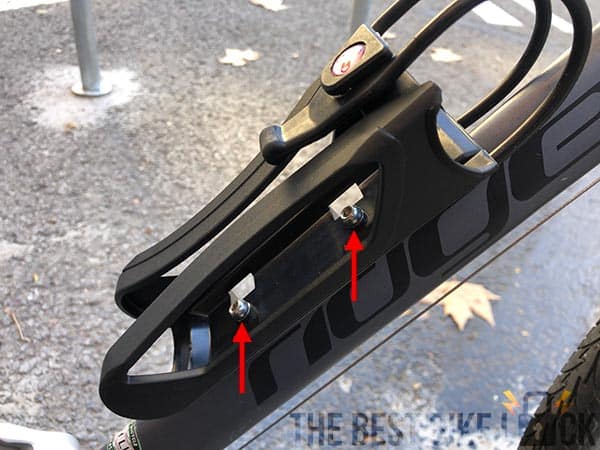 You get a tough plastic case with a rubber strap that stretches over the lock to keep it in place. If your frame has holes for a water bottle cradle, you can screw the case into them for a very neat and stable connection.

But if your frame doesn’t have these holes, there's also a pair of plastic grips that you can tighten around the mount and your frame (and a couple of plugs to prevent them slipping). 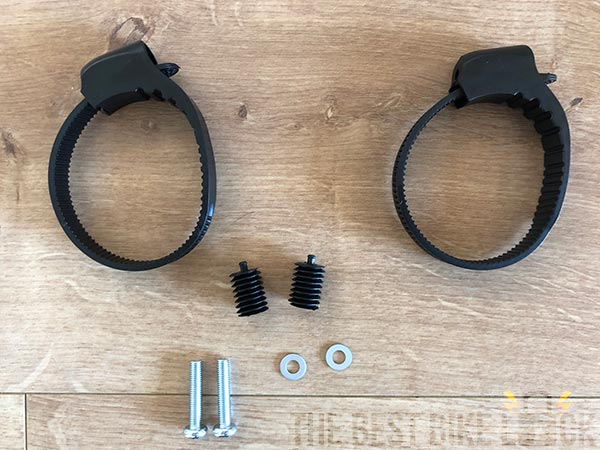 While screwing the case directly into your frame will always be preferable, the plastic grips worked well on my old beater bike and I actually preferred them to the Velcro grips you get with the Abus 6500. They just feel a bit more secure and look tidier! 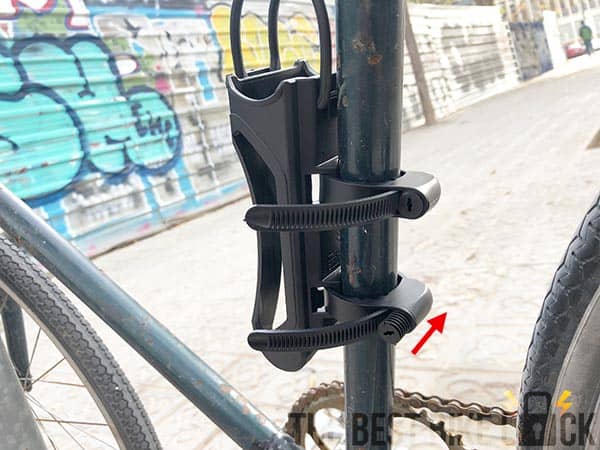 The plastic grips have plastic screws to keep them in place.

Once the case is attached to your frame, the Trelock slides in and out easily, and there is a slight kink in the plastic that means the lock clicks satisfyingly into place as it’s fully inserted. This also keeps it in place (along with the rubber strap).

While out riding, there's no movement from the frame mount or the lock. And no noise unless you’re on uneven ground. In fact, cycling round the city, I didn’t notice it was there at all! 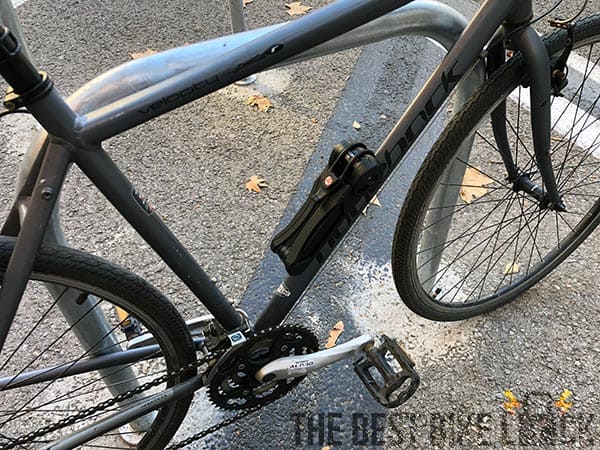 The Trelock FS 500 Toro looks very discrete on the bike!

So whether you screw the case into your water carrier holes, fasten it around your frame with the plastic grips, or throw it in a bag, the Trelock FS 500 is really easy to carry around on your bike!

While the Trelock FS 500 Toro may not offer as much protection as it’s high security rival, the Abus 6500, it definitely beats it in terms of usability!

For starters, it’s longer which means you get more locking opportunities and it should be a bit easier to get it around your bike when you’re locking up. 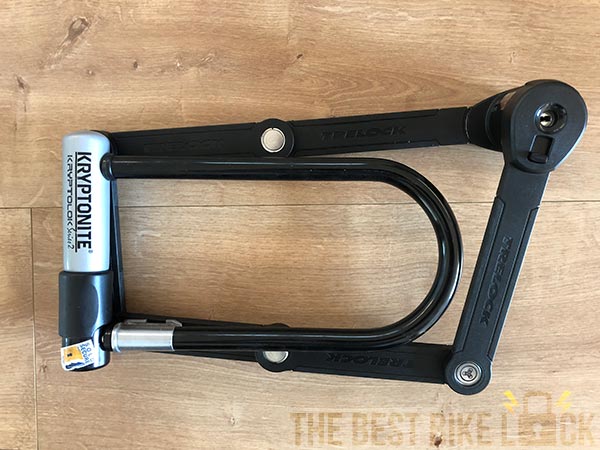 It’s worth emphasising that again: you won’t get much more locking space with the Trelock FS 500 (or any other folding lock) than a standard size u-lock! But of course, the difference is that the folding locks are flexible... 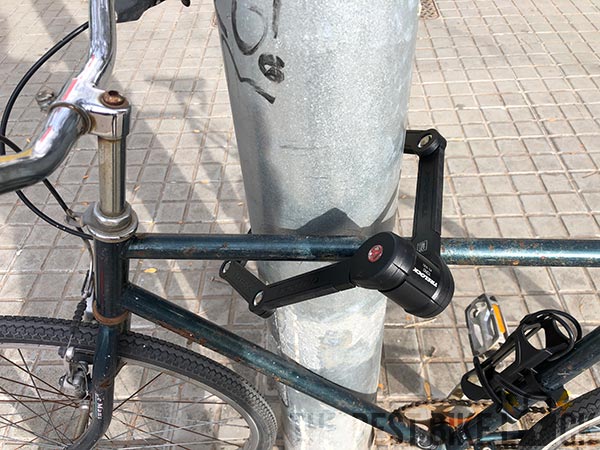 No u-lock would fit around this lamppost!

So you’ll be able to get your lock around things that you wouldn’t be able to with a standard size u-lock. Like lampposts. And other, fatter street furniture. It will also give you an edge in busy bike racks.

And you’ll be able to lock two bikes with one lock! Folders are probably the best bike locks for securing two bikes at once... 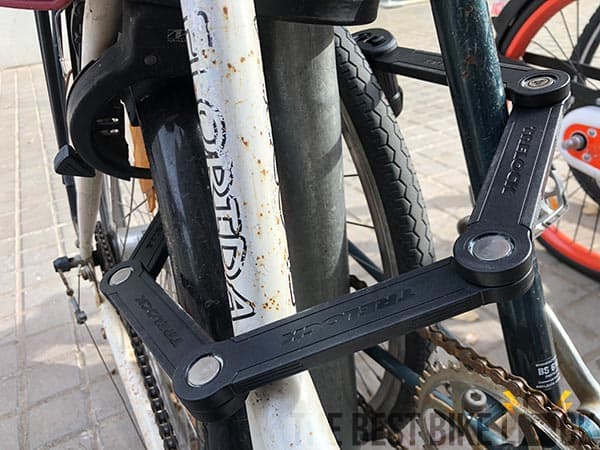 And it’s not just in usable length where the Trelock is more user friendly than the Abus. The process of locking and unlocking the Trelock is simpler too...

When you’re trying to lock it around your bike, the mechanism rotates, which makes it much easier to get everything into a position that allows you to close the lock. 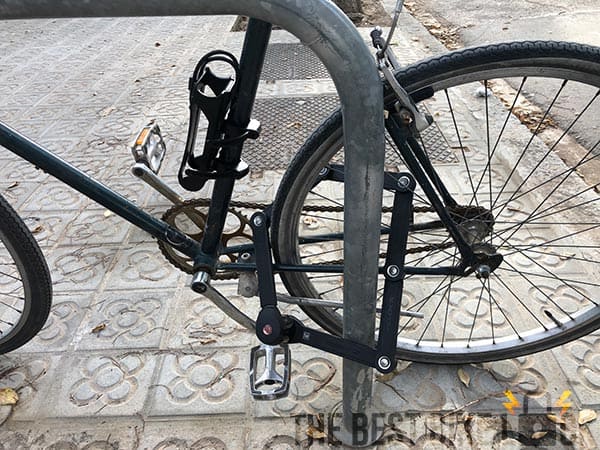 Load of length to secure the frame and one wheel

It’s also spring loaded. And this means you don’t need to hold it in place while you turn the key. Once the bar’s connected, it stays connected. You can then turn the key without worrying about the bar falling out!

The bars also move more smoothly than on the Abus lock. So all in all, it’s one of the easiest to use folding locks that I’ve encountered! 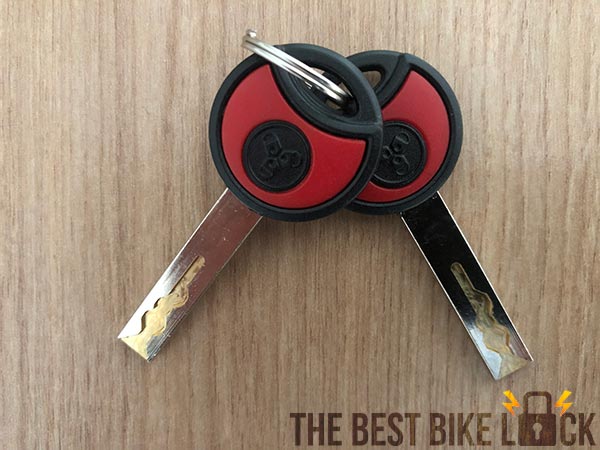 You only get two keys with the Trelock but they give you a key code to order more in case you lose or damage them. And there is a sliding dirt cover that can be used to protect the keyhole from water, and street grime.

It's not automatic though. You need to remember to slide it across the keyhole, or it will be left exposed! 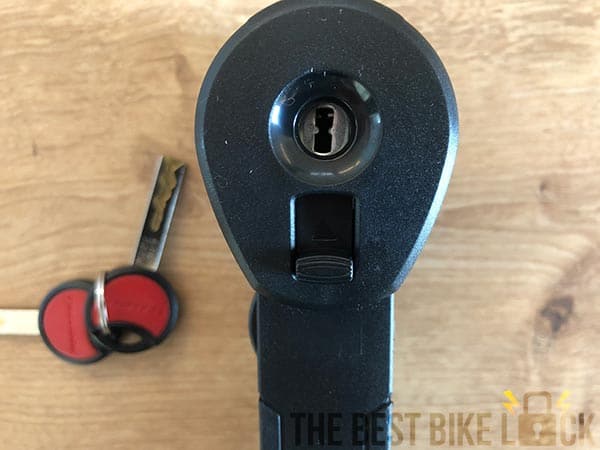 There is a sliding plastic keyhole cover to protect the mechanism

And don’t forget: regular maintenance with WD-40 and a Teflon based lubricant will stop your lock from jamming!

The Trelock FS 500 Toro is one of the easiest bike locks to carry around on a bike and a breeze to use on a daily basis.

For sure, the Trelock FS 500 Toro is a Gold Rated lock, with a decent 2/5 stars from ART. But folding locks are inherently more vulnerable to attack than other bike locks and the Trelock isn’t as secure as the Abus Bordo 6500. 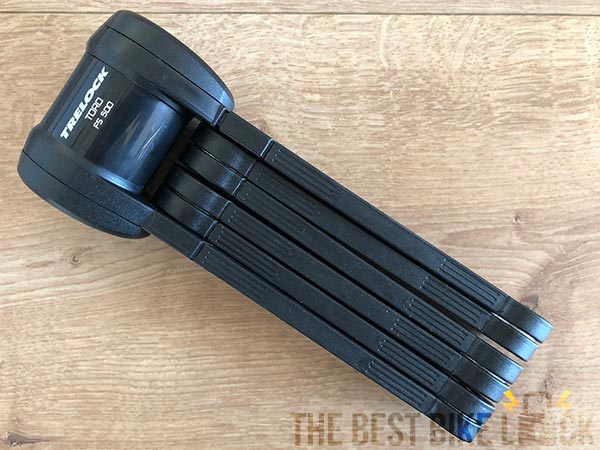 So I’d say it sits at the bottom end of those security ratings.

Having said that, if you really value usability and you’re looking for step up in security from the Sold Secure Silver Foldylocks, the Trelock FS 500 Toro is a really good option.

And is reasonably priced too!

If you need more help determining what security level you need or what type of lock suits your circumstances check out my simple 3 step guide to finding the best bicycle lock. Or compare it the best folding lock.

Alternatives to the Trelock FS 500 Toro

Of course if the Trelock FS 500 Toro isn't the right bike lock for you, there are plenty of others. Here's two you might like more... 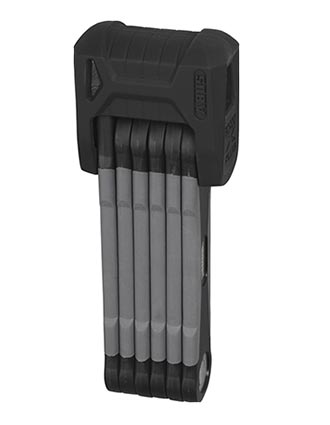 The Abus Bordo 6500 [Amazon], may have exactly the same security ratings as the Trelock FS 500, but it’s undoubtedly more secure.

The steel bars are wider. And despite being shorter than the Trelock, it's also heavier. The locking mechanism is better protected.

And the gap between the bars is almost non-existent, making prying or shearing attacks more difficult.

True, It’s not as user friendly as the Trelock. Not only is it shorter and heavier, the bars are also stiffer and it’s more difficult to get around your bike.

But if your circumstances are high risk and you find the convenience of a folding lock attractive, this is the lock to go for! Read my hands-on review of the Abus Bordo 6500. 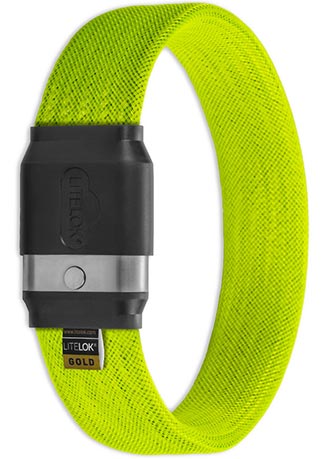 A high security folding lock is not a particularly lightweight option!

If you want the practicalities of a folding lock but don't fancy carrying around all the weight, then the Litelok's [Amazon] worth checking out.

Depending on what size you get, the Litelok will give you a similar (or greater) locking space. But it will be much lighter!

And you can also fasten the wearable Liteloks around your waist like a belt.

So they're super easy to carry around too! I don't think that locking and unlocking is as easy with a Litelok. They tend to be a bit stiff and the 5 cm width can make them tricky to get through your spokes.

They're also vulnerable to long armed cable cutters if you keep them close to the ground. But the Litelok is rated Sold Secure Gold just like the Trelock. So it's suitable for high risk circumstances if you use it correctly.

I'd be tempted to use it around the top tube, keeping it well away from the ground and the wheels where it would be more vulnerable and difficult to use.

And it's a great, lightweight and easy to carry option that's definitely worth considering if these things are a priority. Read my hands-on review of the Litelok Gold Original.