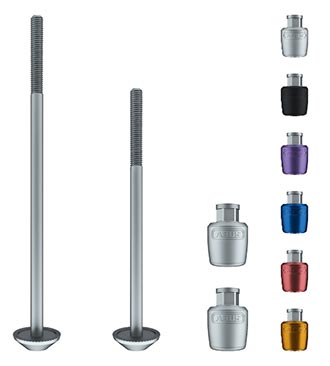 We all know that wheel and seat theft is rife! Anyone who leaves their bike outside for long enough will eventually have one (or both) of them stolen. It’s a real pain! 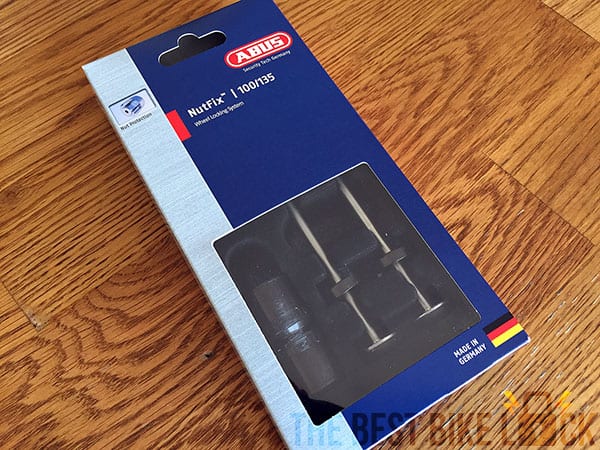 To try and combat this problem, Abus have come up with a new security system for our wheels and seats called NutFix.

And I got my hands on a pair of black, quick release 120f/150r wheel skewers [Amazon] to see how they perform in real life!

How does Abus NutFix work?

The NutFix system uses gravity. While your bike is upright, the skewers are locked and can’t be unscrewed. Which means that your wheels (or seat) can’t be stolen!

It’s only when your bike is tipped onto one side that the locking mechanism is released and you’re able to unscrew them.

This gravity based approach is nothing new. Kryptonite and Zefal already offer wheel and seat skewers that are based on the same principle.

But the Abus system works slightly differently. So lets have a look at it in more detail… 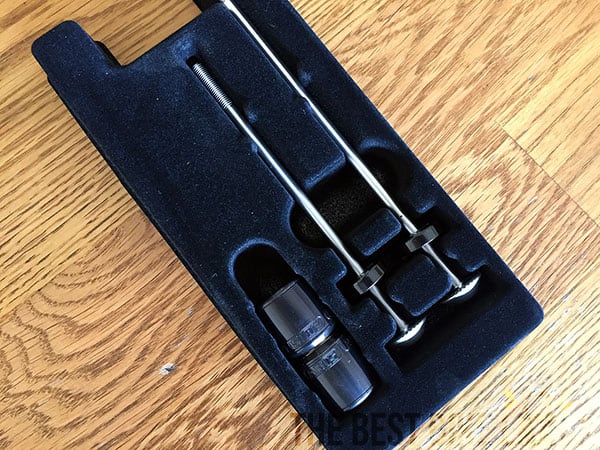 The skewers come in a velvety box!

For each component you want to secure, there’s a skewer and a nut. So in my box there’s a pair for each of the wheels.

One end of the skewer has a smooth, slanted cap that’s actually part of the skewer and isn’t removable. This is the anchor. It fits very tightly against the wheel drop out and I don’t think there’s any tool that could get a grip of this to turn it. 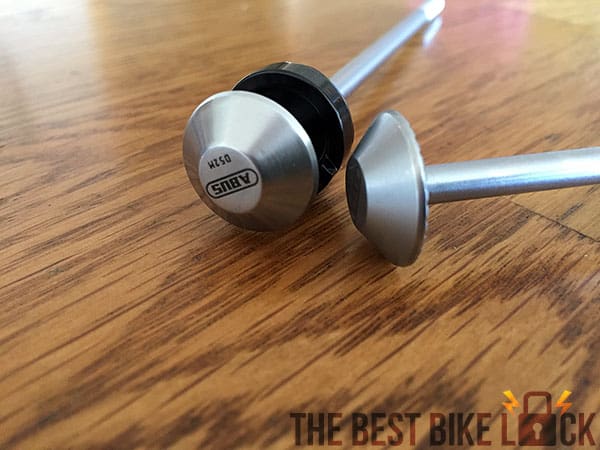 The anchor: no tool can turn this!

At the other end is a fat, screw-on nut that acts as the locking mechanism. This nut has an central hexagonal section which you grip and turn with a 8 mm spanner to tighten the nut.

The outer case of the nut can be popped over the internal section while the nut is in any position. But it can’t be popped off again unless the nut is vertical with the nut pointing upwards. 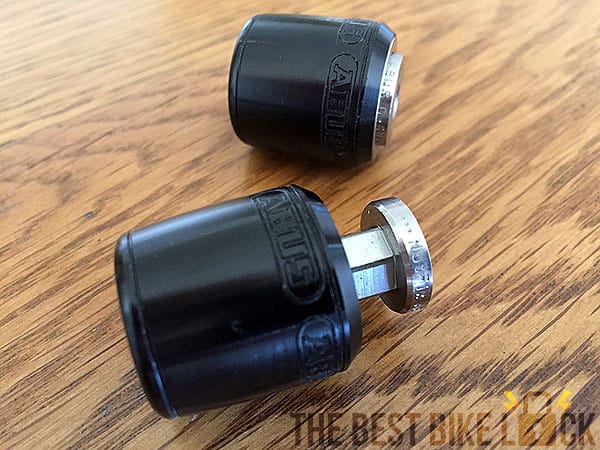 The "nut" with a concealable 8mm spanner grip

You install the system in the same way as you’d install any other wheel skewer: with the bike either upright or upside down. Simply slip the skewer through the wheel and the drop out… 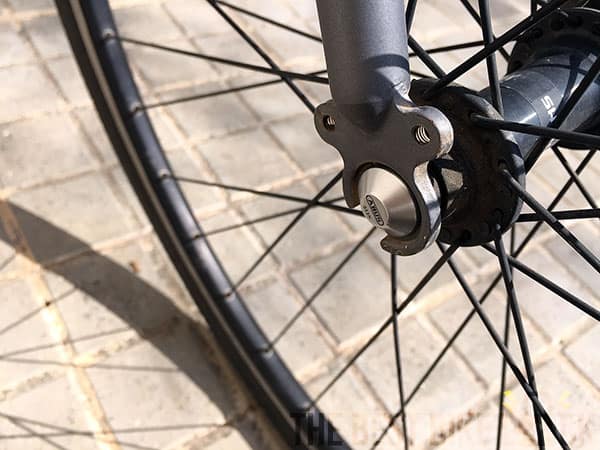 The anchor on one side...

Then (making sure the internal hexagonal section is sticking out), start to screw the big nut onto the other end of the skewer. Tighten it up by using an 8 mm spanner on the hexagonal section. 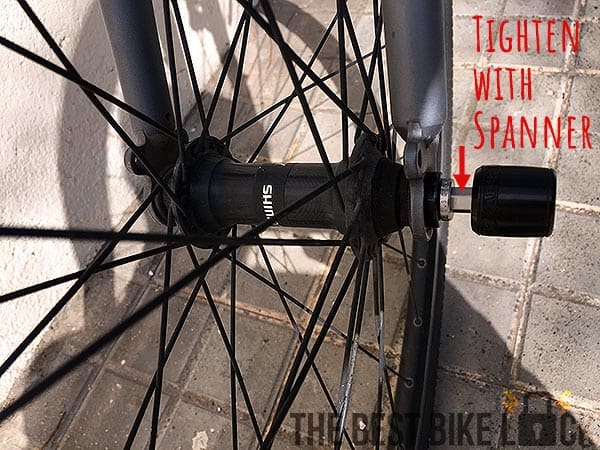 Tighten the nut with a 8 mm spanner

When it’s nice and tight, if you push the nut towards the hub, the outer shell will pop over the hexagonal section making it inaccessible… 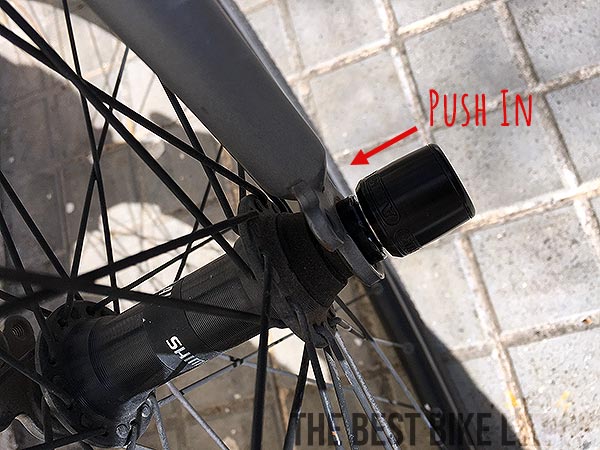 Then push the case over the nut to make it inaccessible

You can’t pull the shell out again while the bike is upright and if you try to unscrew it, the case just spins freely. Your wheels are now secure!

Brilliant! I found the whole system really easy to install and it took less than five minutes. But just in case you didn’t understand my explanation, here’s a video from Abus themselves…

How secure is Abus NutFix?

Once the hexagonal section that’s used to tighten or loosen the nut is covered, you can’t uncover it again while the bike is upright.

It doesn’t matter how much you push or pull, it won’t move. And since the outer shell is not used to tighten or loosen the nut, it just spins freely if you try to unscrew it.

I had a really good go at breaking into it while the bike was upright and got nowhere. So I think it’s pretty secure in that respect.

If you want to remove the skewers to change a tire or adjust your seat, you need to lay your bike on it’s side so that the skewer and the nut are vertical with the nut pointing upwards.

When the nut’s in this position the gravity controlled mechanism allows you to (push down and then pull up to) pop the case off, and you can then unscrew the nut using the spanner on the hexagonal section.

This works really well. There were none of the problems I’ve encountered with other gravity based systems where the release mechanism doesn’t always work smoothly. Which can be incredibly frustrating when you’re trying to fix a puncture!

But you've got to lock your bike in the right way to make sure that a thief can't turn it onto its side! 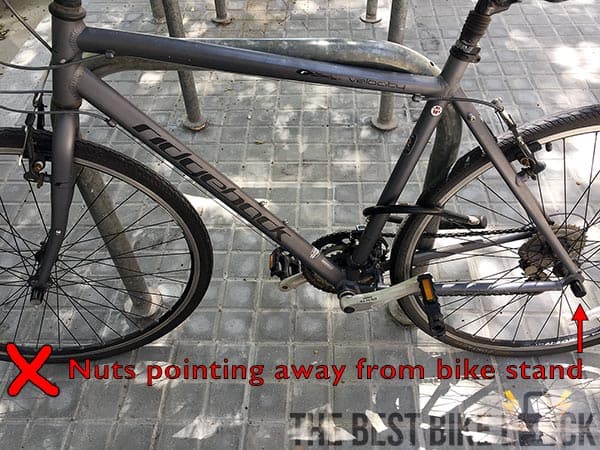 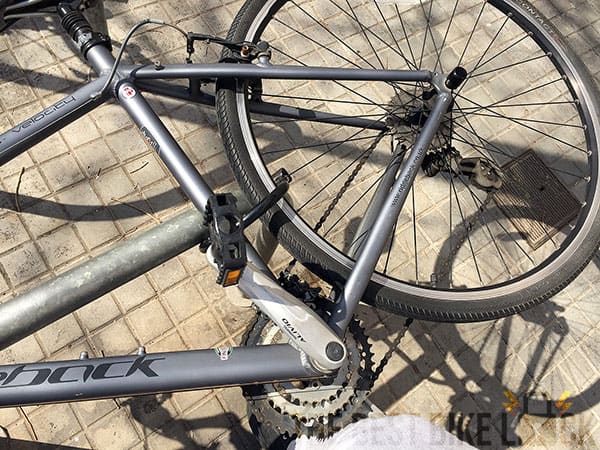 Here, I can lift the bike up and horizontal while it's still locked

However, if you lock your bike with the nuts facing inwards, if you lift the bike up horizontally, the nuts are pointing towards the ground and the gravity based lock won’t be released, so you wont be able to pop the case off… 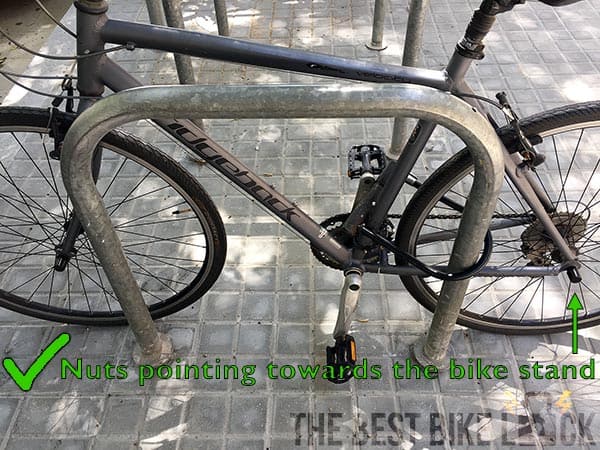 All in all, I liked the Abus NutFix system. The components are really well made, they’re easy to install and they function as intended.

I like the fact that you don’t need to carry around any special tools (other than a normal 8 mm spanner) and as long as your bike’s vertical, it seemed very secure.

The fact that there’s no quick release levers and no obvious way to unscrew the nuts will prevent most thieves from even trying to steal your wheels or seat. But to stop a more determined thief, you’ll have to be very careful about the way you lock your bike.

If a thief can get your locked bike horizontal (with the nuts pointing upwards), then they could pop off the nut shell and steal your stuff. So to stop them doing this you’ll need to make sure that you always lock your bike with the nuts facing towards whatever you’re securing it to.

That way, it’s impossible to manoeuvre the bike into a favourable position for the thief. Brilliant!

Don’t forget: anything that reduces the weight of the security systems we have have to carry around every day to protect our bikes should be welcomed.

And if the Abus NutFix means you can use one bike lock rather than two, then that’s something we should celebrate!

There are of course alternatives. Slightly more secure are the likes of Pinhead and Pitlock which provide unique keys to unlock their skewers. Slightly less secure are the non-standard keys of systems like Hublox, Trans-X and ETC.

And of course there are plenty of DIY approaches too. For more details, check my complete guide to protecting your wheels and seat.